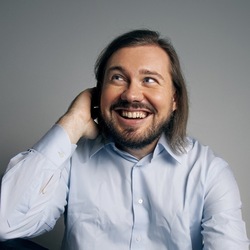 John Clement Anderson is the founder and general manager of US classical and jazz record label, “Odradek Records”, the white label logistics, marketing and distribution service GhostLabel.net, and inventor of the democratic blind evaluation platform ANONYMUZE.com and B.io. He is owner of Studio Odradek “The Spheres” (in Italy), and manager of Ashlar LC, a property management firm dedicated to historical preservation and “adaptive reuse” in Kansas (USA). He taught pre-academy piano courses at the Accademia Musicale Pescarese, and is producer for many of the classical discs released by Odradek.

His ideas on democratic and cooperative business models for the music industry have received the attention of major international newspapers, specialist magazines, and public radio programs, and have brought him invitations to speak at leading industry trade-shows, including Classical:NEXT. He is a voting member of the Recording Academy (Grammys) and an associate member of the International Artist Managers’ Association (IAMA).

John Anderson has two Master’s performance diplomas from the Music Academy of Pescara, Italy, where he studied with Bruno Mezzena, who was a pupil of Arturo Benedetti Michelangeli, Marguerite Long, and Tito Aprea. He started piano lessons with Phyllis Olsen when he was four in his hometown, Lawrence, Kansas, (USA), and studied with her until university.

He read music at Hertford College, Oxford, and later that year began commuting to the academy diploma programs in Pescara, on the Adriatic Sea, for lessons, sunshine and fresh fish. He graduated fourth of his class in 2004 with a “First” in Music, with the highest marks of his year in both performance and composition. While there, he served as artistic director to the Oxford International Music Festival, president of his college music society, and conductor of his college orchestra.

After university, he moved to Italy, where he still lives, to complete his diploma program with Bruno Mezzena. He received his first diploma with perfect marks in 2005. In 2011, he was awarded perfect marks, lauds, and “special mention” for his second performance diploma concentrating exclusively on 20th century piano repertoire. Meanwhile he continued to study composition and analysis with his Oxford tutor, Hugh Collins Rice, and in courses at the Academy in Pescara. He is a dedicated advocate for new and 20th century music. He has performed in USA, UK, Italy, Switzerland, and Russia, and with various orchestras in Italy, UK, and United States, and he has participated as a jury member for two international music competitions in Moscow.

He is married to Italian pianist and slavistics researcher Pina Napolitano (pina.com) and lives in Rome.